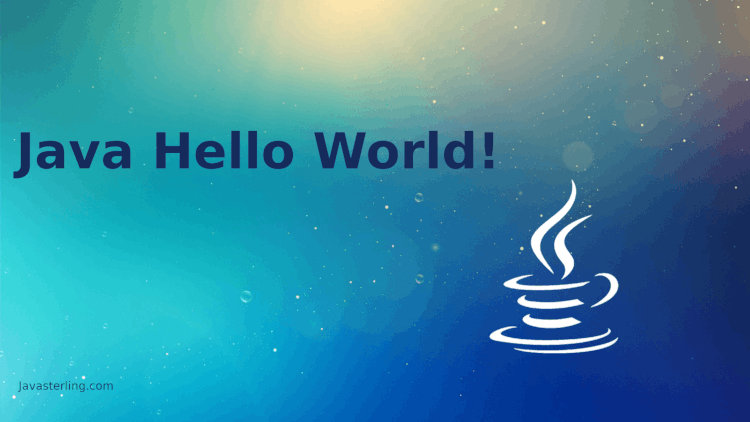 In this section of learning Java programming, we will see the requirements and steps of creating a Hello World Java program. Further, we will explain each line of code.

Before proceeding further, let’s have a quick index of the topic:

To compile and run any Java program, we must have the following tools adequately installed on our machine:

The quick steps for creating and running the first java program are as following:

Step1: Open the terminal and execute the below command ( for Linux)

It will open the vi editor. Move it to insert mode by pressing the ESC and I keys. It will look like:

Enter the below code in HelloWorld.java file

Step3: For windows, save the file as HelloWorld.java.

Step4: Open Terminal and navigate to the directory where the HelloWorld.java exists.

Step5: Execute the below command to compile “HelloWorld.java.”

The above command will compile the java code and generate a HelloWorld.class file. It will not produce any output if successfully compile the code.

Step6: Now, the final step is to run the java program. Execute the below command:

The above command will produce the below output:

There may be a chance that you have made any little mistake so that you will not be able to run the program. Visit the Java primary method post; there are all possible errors listed.

Explanation of the Java program

Java is an object-oriented programming language, so the entire Java code should be in a class file. There must be the main method in a Java program, which is the public static void main(String Args[]). The Java compiler starts executing the program from the main method. The Java starting class should be public so that it can be accessible by all; otherwise, it will throw a compilation error. If we did not any access specifier by default, it would be public. Consider the below code:

It is public that means that anyone can access it.

It is static, which means that you can run this method without creating an instance of Main.

The void keyword stands for this method doesn’t return any value.

Next is a print statement which is used to print the string entered in it. See how it works.

Many people love to code on IDE. The Eclipse IDE is one of the most popular IDEs which is used for Java programming. If you have not installed Eclipse Ide yet, see our post on How to install Eclipse IDE.

Open Eclipse IDE and navigate to File->New->Java Project. It will look like:

Now type the name of the project as CoreFirst. Consider the below image:

Now open the project from the project explorer menu on the left. Consider the below image:

Now right click on the project name and navigate to new-> Class.

Now Enter the class name HelloWorld.java. Consider the below image:

Click Finish to continue. Now, Put the below code in it.

Now, right-click on the file and select Run as ->Java Application. It will execute the first java program and produce the below output: